Posted on July 14, 2014 by carolyncustisjames 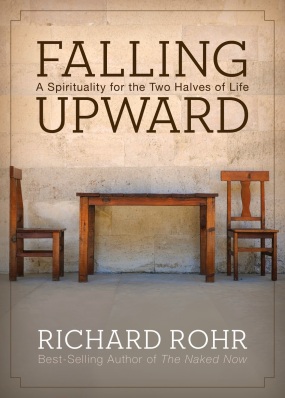 This past week, I passed the three-month marker since my surgery and I’m back in fighting form.

During my recovery, (besides tracking baseball) I’ve been reading a lot. I’m in my second Richard Rohr book. The first was Falling Upward: A Spirituaity for the Two Halves of Life—a powerful read I recommend that was especially timely to be reading during my recovery from surgery.

I mostly like what Rohr has to say. In fact, at this point I probably qualify for a Richard Rohr Reader Fan Club membership.

However, as I was reading From Wild Man to Wise Man: Reflections on Male Spirituality, Rohr crossed a line that triggered a firestorm in me. He dropped an F-bomb, and I can’t let this pass without comment.

As Rohr laments the absence of fathers (especially as spiritual influences) in the lives of their sons, he writes,

“Religion in our culture has become the province of the female, and spirituality has become feminized. American Christianity is much more about belonging and consoling [alleged “feminine” traits] than doing, risking and confronting [aka “male” attributes]. Nor can Jesus even provide a real male model for [men], for we have become so used to seeing Jesus as God that we never truly see Jesus as a man. He even has blond hair and blue eyes…” [italics and bracketed comments are mine]

Rohr is not the first man I’ve known to use this kind of offensive language. I’ve had several candid “conversations” with Christian men I’ve heard talk about “the feminization of the church” when speaking publicly. They often appear surprised that women would find their language objectionable.

I can understand and even appreciate Rohr’s larger point, but the use of the word “feminized” (or “feminization”) misses the mark. Such language disparages women—actually points the finger of blame at them for what is wrong with American Christianity and why some men avoid attending church. It misdiagnoses the problem and justifies promoting a testosterone-driven version of Christianity as a cure (as we are seeing in certain sectors of evangelicalism).

This just creates a whole new set of problems.

Ironically, at the very moment I came across Rohr’s remark about a “feminized” American Christianity, seventy-two women from six countries were gathering in the Colorado Rocky Mountains for the purpose of summiting seven 14,000 foot mountains in four days.

Their previous climbs have included Mt Kilimanjaro and the Mt Everest Base Camp. None of these are recreational climbs. These women are testing their physical limits to raise awareness and funding to help stop slavery and human trafficking.

I’ve heard their stories. I was sore for days after doing one of their “moderate” climbs. These major climbs are not for sissies!

The Freedom Climbers (ranging in age from 18-72) are my heroes. They’re going way outside their comfort zones for the sake of others. Their actions define the meaning of “doing,” “risking,” and “confronting,” although these traits, as they’re discovering, are well within the attributes God intends for them as female.

I’m willing to give Rohr the benefit of the doubt (this one time anyway) because of what he says earlier in his book. There he rejects dividing human characteristics into masculine or feminine categories as “false-masculine” and “false-feminine.” He goes on to assert that “both of us are the losers” when we selectively choose some qualities while rejecting others that are equally essential to being fully human—qualities Jesus models for all of us.

In the end, whatever Rohr meant by “feminized” with respect to the evangelical church and Christian spirituality is as disturbing, distasteful, and costly to women as it is to men. We all need a strong, deep, caring, and outwardly mobilized Christian spirituality. Women cannot be who God created us to be as ezer-warriors if we do not cultivate strength, decisiveness, and a readiness for action. And frankly, men will be stunted if they are duped into thinking their manhood is compromised if they are loving, sensitive, and gentle, or if they cry.

“Feminized” and “feminization” may not be four-letter words. But these F-bombs need to be dropped from this discussion nonetheless!