Posted on February 14, 2006 by carolyncustisjames 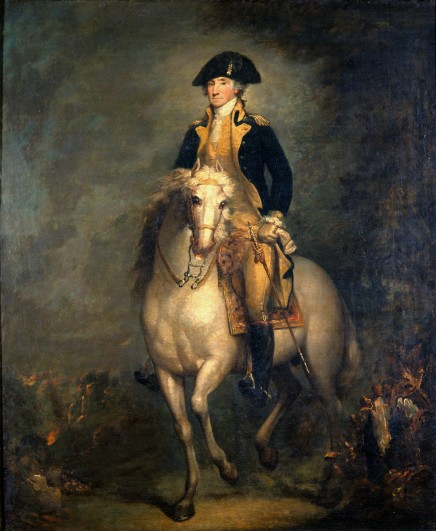 I’m not a fan of war stories. Given a choice, I much prefer to curl up with one of Jane Austen’s classics or dive into a book that is good fodder for my work, than pick up a book about war.

That was until I was outvoted, when my book club decided to read David McCullough’s bestselling 1776, the saga of George Washington and the early days of America’s fight for independence. Suddenly, I was faced with 294 pages of war, and I wasn’t looking forward to it. Needless to say, when we met again, it was something of a surprise to me (not to mention the rest of the group) that I was the only one who absolutely loved the book.

It was slow reading at first—all those names and details necessary to set up the narrative. But once the story got going, I was completely drawn in, so much so, that after a while 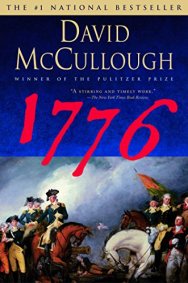 McCullough reveals grim aspects of this pivotal year in American history that get left out of idealized accounts of the American Revolution. I felt my spirits sag as page after page recounted crushing defeats for Washington and his rag-tag army. They were ill-equipped, undisciplined, sick, malnourished, and bitterly cold—sometimes even shoeless—and, except for a tiny minority, devoid of military training. Their numbers declined alarmingly from massive casualties, the steady drain of defections, and a surprising lack of commitment.

I never saw the Revolutionary War that way before.

In contrast, the fine-tuned British army held the advantage from every angle. They were highly trained, heavily armed, well fed, and properly financed. Repeatedly, whenever the two armies clashed, American losses were heavy, and retreat seemed their only option. The odds were hopelessly stacked against Washington and his troops. As I continued reading, ridiculous as it sounds, I felt a growing worry inside about how everything would turn out.

It would have been nice to think God was on the side of the Americans, but that was never clear to me. Both sides could (and did) legitimately point to Providence turning the tide in their favor at one point or another. One day the wind filled the sails of the British ships and the whole fleet came bearing down on the hapless Americans. Another day fog provided thick cover for the fleeing American troops, who vanished into thin air to the consternation of the watchful redcoats. God’s purposes are more complex than simply taking sides. And in this case there were praying soldiers on both sides of the battle. I’m learning (slowly, I confess) that God’s purposes for me, as well as for his world, are advancing solidly whether I’m celebrating victory or suffering defeat.

As I read on, the lines between 1776 and 2006 began to blur, and I felt like my own story was being told. As a woman—an ezer-warrior with plenty of battles of my own—I’m often overwhelmed by the odds against me. And, despite what I know to be true about how God’s great story will ultimately turn out, when I’m grieving another defeat, I still wonder if that really applies to me. I know I’m not alone in this.

Probably the most powerful impact of the book came as I entered into the agonies of the man at the center of the story. It may sound a little silly to some, but I actually began to feel a lot like George. In his battles, and despite his best efforts, he was often inept and indecisive. He made a string of bad decisions and missed crucial opportunities. At many points he was outsmarted and outfought. How I wish I didn’t know what that was all about. I certainly related to the description of Washington at one of his lowest moments, looking okay on the outside, while weeping in his heart.

For someone who has studied American history as many times as I have, I was wonderfully surprised by Trenton—the battle where the Americans—“battered, weary, ragged as beggars”—refused to quit and pressed on to a stunning victory that surprised them as much as it did anyone else and turned the tide of the war. Remarkably, their only casualties in this battle were two soldiers who froze to death on the march to Trenton. One historian remarked on their victory, “It may be doubted whether so small a number of men ever employed so short a space of time with greater and more lasting effects upon the history of the world.”

From prison, Paul—who had his own share of battles to fight and understood the agony of defeat—refused to consider the odds. He pointed to the resurrection power of Christ that gives us reason to hope, no matter how badly the war is going. “I want to know Christ and the power of his resurrection and the fellowship of sharing in his sufferings” (Philippians 3:10).

I’m still not a fan of war stories. But 1776 is on my list of all time favorite books. It is a powerful reminder to me that the battles I am fighting—for my husband, my daughter, my loved ones, and the work to which God has called me—are never to be measured in terms of odds or even my own failures and shortcomings. Ultimately, it doesn’t even matter that I’m no match for the Enemy who “prowls around like a roaring lion looking for someone to devour” (1 Peter 5:8). 1776 reminds me that while I may suffer bitter defeats and may, like George, weep inwardly over casualties I couldn’t prevent, you never know when God will show up with his resurrection power, and there will be another Trenton.