Posted on May 24, 2006 by carolyncustisjames 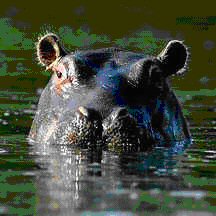 Anyone who has ever faced major surgery knows the kinds of anxieties that descend as the hour of surgery approaches. Several years ago, I was a surgical patient feeling those very fears and apprehensions. I was at a teaching hospital, so on the eve of surgery my surgeon arrived with an entourage of medical students to discuss with me the risks and possible outcomes of my surgery. Like television ads for miracle medications that end with a frightening list of warnings and potential side effects, his somber monologue didn’t ease my fears at all.

What surprised me, however, (and “surprise” hardly describes my reaction) was what one student said as the group quietly filed out of my room. With the glow of a child on Christmas Eve and completely indifferent to how I might be feeling, she paused at my bedside and said in a low but eager voice, “I can’t wait to watch your surgery!”

Her bedside manner left something to be desired.

Some may wonder about God’s bedside manner, when He finally appeared in Job’s story and, instead of binding up the gaping wound in Job’s soul or answering the questions that were tormenting this poor sufferer, God talked about hippos and ostriches, hawks and alligators, ocean waves and snow.

What kind of “bedside manner” was that?

Anyone reading the story of Job for the first time would expect this to be the moment when God explains to Job about the conversation He had earlier with Satan or defends Himself against accusations raised by Job’s sufferings. But none of these issues come up. And the simple fact remains: God doesn’t explain or defend Himself to His child. Instead, God seems to change the subject by taking Job (whose pain persisted) on a nature walk.

But God wasn’t avoiding uncomfortable subjects. He was actually talking theology—zeroing in on what was really troubling Job. He used this seemingly off-the-subject science lesson to address the central question for any sufferer: Is God someone I can trust or not? And so God raises the subject of hippos (Job 40:15-24). He lets creation testify of His goodness, wisdom and care in running things in this world. He is sovereign over all, and even the beasts are subject to and dependent on Him. The evidence is powerful and disturbing all at once, especially within the context of pain like Job’s.

In the process, Job is suspended between his own staggering losses and a God who is good enough, wise enough, and great enough to be trusted even against the backdrop of a shattered life. According to the evidence, God maintains a staggeringly careful, meticulous, ingenious reign over all creatures on the earth (hippos included). The unmistakable implication is that He knows what He is doing with Job too, even though Job doesn’t have the answers he seeks and his whole life is in ruins.

Job’s response amazes me. He is on holy ground and he knows it. While still in utter grief and unspeakable pain of body and soul—without having a single detail of his life made right again—Job bows in repentance and embraces God.

In response to God’s first question, “Who is this that darkens my counsel with words without knowledge?” Job doesn’t point to his friends. He points to himself. “I know that you can do all things; no plan of yours can be thwarted. . . . Surely I spoke of things I did not understand, things too wonderful for me to know. . . . My ears had heard of you but now my eyes have seen you.”

There’s a lot I don’t understand about Job’s story, including the part about the hippo. But here are a few thoughts that I’ve managed to extract from Job’s nature walk with God.

The first lesson in the book of Job is the first lesson we forget. We never have all the facts. We can guess all we like at why certain things go wrong, but if Job’s story tells us anything, it is that God’s ways are mysterious, including His ways with us. He isn’t obligated to explain himself fully and probably never does. I’m not even convinced (as some are) that He is waiting for me at heaven’s gates with explanations for my unanswered questions here on earth. We live in the realm of faith, and that means trusting God for who He is and not because we have all the answers we want. Faith may want answers, but miraculously it is able to function without them, simply because the One we are called to trust is worthy of our trust. That’s at least part of the message of the hippo, the ostrich and the alligator.

Second, God answers our questions with Himself. He doesn’t offer explanations for why bad things happen to us or to those we love. But He opens our eyes through pain to see more of Him than we would otherwise. The sufferers of this world have much to teach us all about our great God and His trustworthiness. And I’d much rather listen to one of them than to someone who has never experienced unanswered prayer, endured God’s silence or suffered some senseless, bewildering loss.

Third, it shouldn’t surprise us (but usually does) when we find ourselves living in a tension between what we know to be true of God and the painful state of things in our lives. This is the realm of faith—where God is shrouded in mystery, resistant to formulas and simplistic explanations, inscrutable to our probing minds—where we choose to cling to Him despite the pain, despite our confusion, despite unanswered prayers. Faith is not seeing. It is not knowing how things will all turn out in the end. It is about knowing God and living in light of who He is. It is, as Jerry Bridges says, “trusting God even when life hurts.”

Maybe a thoughtless medical student changed her ways after taking Bedside Manners 101. But God still takes His struggling children on nature walks. He wants us to consider the hippo and contemplate the mysterious God who holds us in His hands and who can be trusted whether we understand His ways or not.