Posted on January 24, 2011 by carolyncustisjames

Oscar buzz surrounds Jeff Bridges’ portrayal of U.S. Marshal Reuben J. “Rooster” Cogburn, a crusty character with a reputation for true grit. The marshal lives up to that description. Grit is written all over the scene where an outnumbered Cogburn charges fearlessly on horseback into a hail of outlaw bullets with the reins gripped in his teeth and both hands firing pistols.

But true grit is also written all over 14-year-old Mattie Ross (played by Hailee Steinfeld) who is determined to avenge her father’s murder and will stop at nothing to right the wrong against her family. She hires Cogburn, stubbornly insists on accompanying him on this mission, then matches his grit with plenty of her own. It’s a great ezer story! And anyone watching the movie will be cheering her on.

True grit is one thing in a movie, and we like what we see of it in Mattie. But is grit a quality we want to see in ourselves? I’ve never heard grit mentioned in any list of suitable attributes we’d encourage Christian girls to cultivate. And grit is almost certainly missing from eHarmony’s search criteria for eligible single women.

Surprisingly, in the past couple of weeks, women with grit have commanded the news. Their stories support the notion that true grit could well be one of the most important virtues an ezer can acquire—doubly important for us given what God is asking his daughters to do. 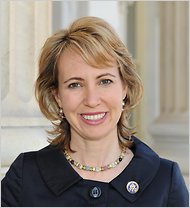 Right now, the nation is watching and praying that Congresswoman Gabrielle Giffords has enough true grit to fight her way back from the bullet wound to her head she suffered on January 8. Our spirits lift every time someone—her husband, the doctors, a friend—says of her, “Gabrielle is a fighter.” We all hope that’s true because she’s fighting this battle for all of us.

Christina Taylor Green, who died tragically during the shooting, is being lauded for showing remarkable grit in her brief nine years. Embracing her family’s baseball legacy, she earned a spot on the Pirates Little League baseball team where she was the only girl and a solid contributor. She recently won a spot on her school’s student council. Aware of inequalities in the world, she already aspired to serve some day in government leadership. With grit like that, who knows what she might have accomplished or how many people she might have helped.

When there are battles to fight, when suffering, violence, and injustice are rampant, when opportunities present to do more for others, when Jesus’ rescue efforts is underway and he summons us to help . . . nothing less than grit will do.

At Synergy2011, we’re going to take an honest look at the twenty-first century landscape for women—a globalized landscape that contains unprecedented opportunities, powerful technological resources, and unspeakable suffering. We will be viewing that landscape through image bearer eyes—as those God has called us to be his eyes and ears, his hands and feet in this world. We are his preferred method of taking care of things in his world, light bearers and grace-bringers on a darkened planet, and there is work to be done for his kingdom.  A job like this—no matter where we tackle it—will take a lot of grit from all of us.

So come to Synergy2011 if you dare, and be prepared for a major outbreak of true grit!