Posted on April 16, 2012 by carolyncustisjames

When I was an 8th grader, I went to a friend’s house after school. I don’t recall if we worked on homework or just hung out, but it was already dark by the time I left for home. As I was walking home in the dark—six long blocks from her house to mine—a man in a car pulled up next to me and stopped, pushed the car door open, and signaled for me to get in.

Nervously, I stepped off the sidewalk and got into the car.

The man behind the wheel was my father and he was fuming—not in anger but with alarm.
In the short drive home, I heard a sobering talk I won’t ever forget about the dangers for women and how to keep safe. It’s the same talk we all give our daughters, conveying to them that they matter and alerting them to avoid risky situations and people who might do them harm. 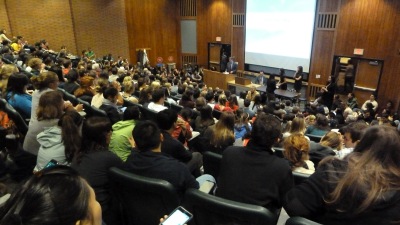 Last Thursday, Frank and I joined a packed-out crowd at Boston College to hear Nicholas Kristof speak on the bestselling book, Half the Sky: Turning Oppression into Opportunity for Women, which he co-authored with his wife and Synergy2011 plenary speaker, Sheryl WuDunn. Listening to either of them takes you into a world where girls routinely face unspeakable danger and no worried dad drives up in a car to warn and escort them safely home.

In his opening words, Kristof asked us to guess if there are more men than women in the world today. The majority of his audience got it wrong. Although in the West, the number of females exceeds males, males significantly outnumber females in the rest of the world. The reason behind declining numbers of females is directly connected to how they are devalued. As many have noted, “It’s a girl!” are three of the most dangerous words spoken in many parts of today’s world, where gendercide snuffs out the lives of millions of little girls before they ever have a chance. Countless other girls die from neglect, malnourishment, and because they are deprived of basic medical care, for no other reason than they are not boys. 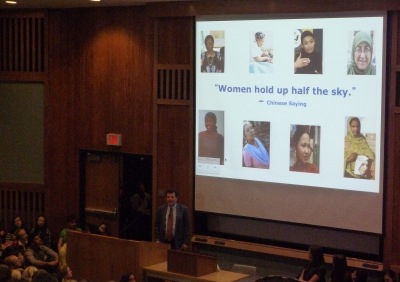 But the problem extends into other spheres. One of the worst is the world’s thriving sex-trafficking industry.

Kristof recounted appalling brutality against African slaves. He pointed out, however, that slaves were expensive, so that brutality against slaves—unspeakably harsh and inhumane as it was—usually had limits. Slave owners wanted to preserve their investment (sometimes in the thousands of dollars) by keeping slaves alive and fit for hard labor.

Not so for sex slaves.

Girls can be purchased easily and trafficked for a mere $100-150. So if one dies, replacing her is no big deal. As a result, resistant girls are often beaten, abused, and killed in front of the others girls to “teach them a lesson.” Trafficked girls are subjected to unprotected sex, and many die of AIDS. Once trafficked, a girl’s life expectancy shrinks to 10-12 years. But the loss of one girl is minimal, and she is cheap to replace. In essence, girls are disposable.

Kristof was careful to point out that traffickers are both male and female, so this is far more complex than the “battle of the sexes.” Yet, despite all he has seen and reported, he didn’t come across as pessimistic. Having said that, it is obvious that this crisis has deeply impacted him. Both Frank and I remarked afterwards how striking it was that despite Kristof’s growing reputation and significant accomplishments, he seems both humbled and changed by what he has witnessed. He is driven to call others to action.

It’s been nearly three years now, since Half the Sky came out in September 2009. I still believe this is one of the most important books I’ve ever read. It’s certainly must reading for Christians—although it never ceases to amaze me when I speak at churches, seminaries, and Christian conferences (and I do ask), how few of us have read it.

Kristof ended his talk with two questions that hopefully will prompt reluctant readers to plunge ahead.

Regarding the first question, Half the Sky is full of surprising stories of women who with nothing going for them and everything against, have single-handedly stood up to the evil and made a significant difference for others. As Christians, we can sort through this question easily by turning it around. If you were the trafficked person and someone came for you, would it even occur to you to ask if they really made a difference? Isn’t that the kind of revolutionary insight the second greatest commandment is designed to give us?

If the second question puzzles you, I suspect you’re one who hasn’t yet read Half the Sky. Speaking from personal experience, I’m convinced that unless and until we read these stories and put faces on the statistics, we won’t care. And if reading Half the Sky doesn’t convince you, not simply to care, but also to act, then I hope you’ll read Half the Church and discover why as God’s image bearers we are called to this.

Unlike so many girls in the world today who are hearing they are disposable, I learned from my father that night that girls are indispensable.