Posted on February 11, 2013 by carolyncustisjames 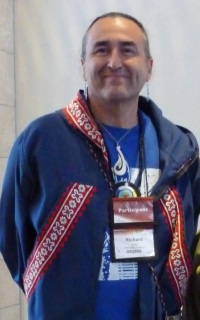 Nicholas Wolterstorf’s agonized words after the tragic death of his son carry fresh meaning for the family and friends of Richard Twiss whose journey on this earth came to an abrupt end Saturday after he suffered a massive heart attack. The outpouring of love and loss on the Internet from those whose lives he touched gives a sense of the void they are feeling.

My only face-to-face encounter with Richard was at Lausanne in Capetown, South Africa back in 2010. When I was being herded through customs with other passengers, one man stood out from the rest. He was taller than everyone else, with long braids down his back, and dress that distinguished him as Native American. I remember thinking, “That would be an interesting conversation. I hope he’s going to Lausanne.”

Our paths crossed between sessions at the conference. The conversation that followed was brief, but poignant. He opened my eyes to a world and a culture I knew next to nothing about. It is one thing to read about Native Americans (First Americans); it is quite another to hear Richard Twiss tell his own story. To be sure his story as a First American and mine as a woman were different, but the perennial story of marginalization was the same.

Richard wrestled with questions about how the gospel plays out in the lives of Native Americans and in their culture. He wanted to know if following Jesus also meant becoming white—a hard pill to swallow, given the fact that being Native American is their DNA, not to mention their long history of suffering injustice and genocide. When a Native American turns to Jesus, how much of themselves and their culture must they leave behind? Does Jesus in fact redeem the culture—theirs and every other culture too—and bring it to its fullest expression and purpose, or does conversion mean losing cultural distinctives to blend in with the majority evangelical world—the dominant Christian culture?

Richard wrestled with how the church so often views Native American believers as “needing help” and fails to see the richness they bring to the church’s life and ministries or how their heritage and perspective can enrich our understanding of theology and the Bible. Why has the evangelical church so ignored First Americans and what have we missed by excluding them?

It was a deep conversation to say the least.

My conversation with Richard was a powerful reminder that these issues deserve the whole church’s most thoughtful and serious consideration. Other minorities are impacted by where we land on the question of what constitutes oneness in the Body of Christ and how we value and need those who are different from ourselves. What does God mean for us to learn from them? Globalization, immigration, Richard Twiss’ story—and I would add also the ongoing discussion about building a true Blessed Alliance between men and women—place these issues front and center. 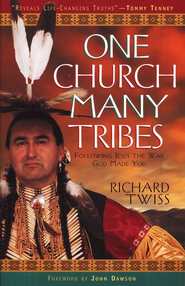 The damage isn’t confined to them, but touches the whole Body of Christ in profound ways. The very health, life, and mission of the church are harmed when we arrogantly refuse the gifts and ministries of others as unnecessary, when in fact the Spirit has entrusted gifts to them that we all need. We have much to learn from each other. We may be willing to add another place at the table, but are we ready to listen and to embrace the changes that new person’s presence and voice will require?

Richard fought to retain both his cultural identity and his voice—not out of a sense of arrogance or insensitivity to others, but because of his passion for the Native American people and the richness of their culture, his hunger to understand God’s word more clearly, and the recognition that a single dominant cultural perspective is wholly inadequate for the understanding of God’s word.

Thanks Richard for an enlightening conversation. Perhaps it was appropriate for it to have taken place in a land scarred by apartheid.

Richard Twiss’ journey may be over but, like Abel, his voice still speaks—through recorded messages, his writings, and those who will follow in his footsteps—and for that I am grateful.

As his friends wrote online,

“Richard is loved by countless people for his love for life, the ways of Jesus, and justice for Native peoples. His heart breaks for the damage done to Native peoples in our country and longs for a hope-filled future for them.”

“My prayer is that God will raise up other Richards who will continue the work he began. Richard was a righteous warrior servant who worked to overcome years of disconnect between the Gospel and Native American cultures. May the drums resound as Richard enters the presence of his Creator.”

Leadership Journal published Richard’s story, told in his own words: “Another Path of Jesus”

His ministry: Wiconi International
His books:   One Church Many Tribes: Following Jesus the Way God Made You
Rescuing Theology from the Cowboys

The video below makes sense of one friend’s description of Richard’s “unvarnished wisdom.” His words shed much needed light on blind spots in our Western, American history and thinking. We need to hear this missing and enriching perspective .