Moving into another New Year

Posted on January 10, 2016 by carolyncustisjames

2015 had a wildly crazy beginning to which thankfully 2016’s quiet, restful beginning has no resemblance.

In the early days of 2015, Frank and I had just vacated the Hobbit Hole and were living in a jungle of unopened boxes from our move. Somehow we managed to locate enough of our Christmas decorations to pull off a reasonable Christmas celebration, while carrying on with work and publishing deadlines. 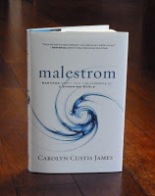 That work included finalizing my manuscript for Malestrom: Manhood Swept into the Currents of a Changing World—the book that compelled me to consider the serious global issues facing men and boys in the new millennium. Malestrom is a frank discussion of how patriarchy is harmful to men and boys. It causes them to loose sight of God’s vision for them as his sons. The destructive consequences show up in the lives of individuals—the men and boys we know and love, but are also linked to violence, terrorism, and wars on the global stage that we hear about from the media every day. This is without a doubt one the most pressing issues facing the church in the 21st Century.

Malestrom was released in June at the Missio Alliance Conference in Alexandria, Virginia.

As the year ended, Malestrom was honored with Christianity Today’s Best Book of 2016 in the Her.meneutics Category and was named as one of Missio Alliance’s Top 10 Books of 2015.

At the same time as Malestrom’s release, Half the Church got a facelift—literally. Much as I loved the original jacket, it didn’t capture the wide reaching, ethnically and culturally diverse audience that Half the Church is targeting. So I am really pleased with the change!

The June Missio conference also marked the first time the Synergy Women’s Network was an official part of the Missio Alliance. A bunch of us were there. Several led seminars. Plans are now underway for a 2016 event that focuses on women. “She Leads” will be in Chicago, October 22. More info will be coming later, especially on the Missio Alliance website. For now, save the date on your calendar!

More good news came when Missio Alliance invited me to become one of their six “Leading Voices” on the Missio Writing Team. This involves a transition that is currently a work in process where I’ll be posting my blogs on a webpage designated for me on the Missio website. You can find it here.  My introductory post is here.

For the moment, I’m blogging on both sites. However, if you are currently subscribed to WhitbyForum (meaning you receive an email alert whenever I post a blog on WhitbyForum) you can subscribe to Missio (you can subscribe at the bottom of the MA page) or follow me on FB to stay informed. Missio is doing a lot of interesting things, so subscribing is a good idea in any case.

Another busy year lies ahead. (Did I mention that we still have boxes to unpack?) I’m praying 2016 will be a year of growing deeper as we learn to walk with God into a future which is always unknown to us, but never to him, and that each of us will do with heart and soul whatever God is calling us to do. I hope you will pray that for me.