Posted on February 29, 2016 by carolyncustisjames 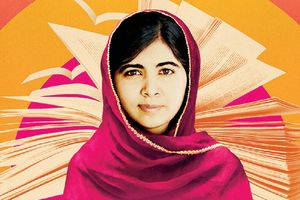 “There is a moment when you have to choose whether to be silent or to stand up.”

In Pakistan, family and neighbors fire rifles into the air to celebrate the birth of a son, but the birth of a daughter is met with silence. According to traditional expectations, a girl’s future will be defined by preparing food and producing children—especially sons.

This is the world into which Malala was born.

If Malala’s story had followed the traditional trajectory, today she’d be a young teenage mother of at least two children. Instead, her story followed a different path when, before she was born, her educator father, Ziauddin Yousafzai, named her after the Afghan folk hero, Malalai.

Malalai, was a young girl renown for shouting words of courage to retreating Afghan troops that led them to a great victory over the British in the Battle of Maiwand—the battle in which she died. That name instilled in Malala a sense of destiny, fueled by the love of her father and by growing up in a home where education was prized.

The film He Named Me Malala is the work of the acclaimed documentary filmmaker Davis Guggenheim (“An Inconvenient Truth,” “Waiting for Superman”). Guggenheim wisely allows the teenaged Malala to tell her own story, seamlessly weaving three strands to give a rich and honest portrayal of the young girl who has become a familiar international figure.

The public strand is captured in media footage and interviews that trace Malala’s public advocacy for girls’ education in Pakistan through the 2012 Taliban shooting. The attempted assassination nearly took her life and resulted in her family’s exile in the UK. Instead of silencing Malala, the Taliban actually amplified her voice and catapulted her onto a larger global stage, giving even greater attention to her cause. On her 16th birthday in 2013, she addressed the United Nations on behalf of education for girls. In 2014, she was awarded the Nobel Peace Prize.

The second strand traces the history of the Taliban’s rise to power in the Swat Valley, Malala’s home and the brutal enforcement of Sharia Law that terrorized entire communities and ultimately led to the complete banning of education for any girls and the bombing of over 400 schools in Pakistan.

The third strand is her family backstory—a piece of the narrative the media cameras weren’t there to capture. Recreated artistically in beautiful animation, this includes the history of her parents and early parts of Malala’s story that add insight to her rise as a passionate advocate for education.

All told, the viewer gains a rich and surprisingly candid portrayal of the girl the world has come to admire for her fighting courage and indomitable commitment to education. She is a fiercely committed schoolgirl, deeply bonded with and inspired by her father, playful and teasing with two younger brothers, and displaying social awkwardness by giggling with embarrassment when the subject of boys comes up. Even her detractors are given voice in this portrayal.

I started following Malala’s story before the shooting that escalated her cause and gave her a global voice. I also read her book, I am Malala: The Girl Who Stood Up for Education and Was Shot by the Taliban. The film is a vivid reminder that her story is not about celebrity, but about disturbing global issues that impact all of us—topics that are astonishingly absent in the current American political discourse, but that we have responsibility to engage.

Here are the takeaways for me:

Global education of girls and boys must be a priority. After her recovery, Malala visited Kenya, Nigeria, and refugees on the Jordanian/Syrian border where education for children is rare or non-existent. Today, over 60 million girls are out of school around the world. Not only the children themselves, but their societies and indeed the whole world, will pay a heavy price for this neglect. The world will be deprived of the precious human resources that remain uncultivated in the minds, gifts, and potential of these children. Who knows, our negligence may be costing us the cure for cancer or sidelining a future global leader for peace? But the poverty, marginalization, and despair that result from the lack of education is a destabilizing force that leads to violence in many regions, including our own city streets.

Adults, especially parents, have the power to inspire their children to aspire and dream. Malala’s passion was given life when her father opened to her a wider world. He gave her the name. She embraced its meaning and went beyond anything he could have hoped.

A girl becomes her best self when she embraces her true calling as a warrior for good. As a Christian, I have long been convinced that God created his daughters to be ezer-warriors. Ezer is the biblical Hebrew word that God uses in creating the first woman (see “The Return of the Ezer”). Malala is an ezer-warrior of the first rank. Her fearlessness in the face of deadly Taliban opposition is breathtaking.

The rise of one small Muslim girl from a remote Pakistani village leaves me wondering as a Christian, what can the rest of us do? What would happen—how might things change for the better—if the rest of us took our lives this seriously? What if we refused to be intimidated or held back by cultural and traditional religious constraints that are welded to our gender and that tie our hands behind our backs? What potential for good might we unleash?

Watch He Named Me Malala and be inspired!

NOTE: A $1 donation will be made to the Malala Fund for every tweet using the hashtag #withMalala through March 10, for a total of $50,000. For more information, see www.supportmalala.com

Published as a Leading Voice for Missio Alliance.
To read the full article, go to MissioAllance/CarolynCustisJames