Why Donald Trump is Good for Evangelicals

Posted on March 9, 2016 by carolyncustisjames 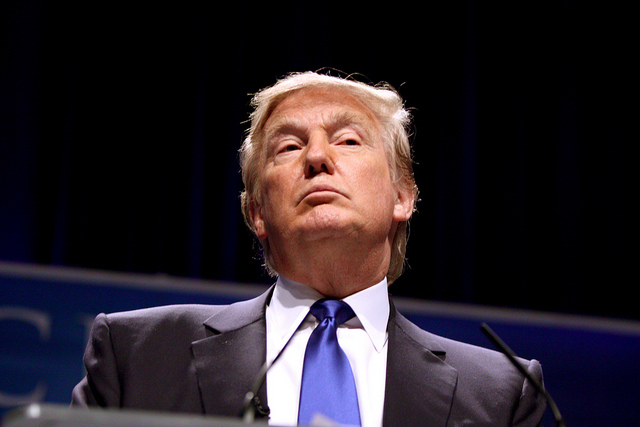 During the current race for the White House, like it or not, politicians, pundits, and the press are once again regarding evangelical Christians as a significant voting block. Currently, a good number of those evangelicals have thrown their weight behind the billionaire mogul, Donald Trump. Their support has plenty of people, including a lot of other evangelicals, scratching their heads. (Some are actually pulling out their hair.)

Trump’s arrogance, bullying, mockery, misogyny and strip club ownership, racism, Islamophobia, name-calling, put-downs, inhumane policies, disrespect for war veterans, his threat to hit back harder anyone who hits him, are blatantly antithetical to the teachings of Christianity and have nothing in common with the Jesus Christians claim to follow.

In their article, “10 Reasons You Can’t be a Christian and Vote for Donald Trump,” Baylor University sociology scholars Christopher Pieper and Matt Henderson write,

“A Christian who supports Trump either does not understand this person and his positions, or supports him in spite of Christian convictions” (emphasis added).

As Mr. Trump’s toxic rhetoric and the list of his offenses continue to pile up, growing numbers of evangelical Christians are taking Mr. Trump to task.

The topic getting the most attention centers on our core identity as evangelicals. What is an evangelical? What do we believe that connects us with Christians throughout history and elsewhere in the world? How do our beliefs impact our political convictions and loyalties? How have American values, politics, and culture wars taken our Christianity hostage and pulled us off mission? More importantly, how do we as individuals and as a body reflect the counter-cultural life, teachings, and mission of Jesus in the public square?

I welcome this development. It can be both healthy and refining for us to look in the mirror and ask ourselves honest questions about who we’ve become and how we’ve lost our way.

We have Donald Trump to thank for raising issues that compel us to reflect on what it means to be an evangelical.

One of the important (but less acknowledged) questions Mr. Trump’s candidacy raises for evangelicals concerns the definition of manhood. Much of what one hears from Donald Trump can only be described as machismo. The tougher than tough-guy posturing (threating not only to kill terrorists, but their families too) conjures up images of “El Chapo” or a mafia kingpin. Make no mistake about it, Donald Trump is a macho man. But here is the rub for evangelicals. Does the Donald really embody the evangelical conception of manhood? Three wives, mistresses, strip clubs, casinos, vulgarity, demeaning the physical appearance of women, mocking the disabled—are these manly traits Jesus would commend?

Definitions of manhood vary from culture to culture and from one era to the next. But the common thread that winds its way through every society is historic patriarchy. Patriarchy is a social system that establishes male authority over women, children, and also other males. It creates a matrix of human power pyramids where there is little room at the top and where a well-populated base is essential.

I recently finished my book on the Bible’s view of manhood,  Malestrom: Manhood Swept into the Currents of a Changing World. In it I argue that one of the greatest threats to men (as well as to women) is the lingering patriarchy that shapes much of our world. The malestrom is comprised of powerful cultural forces that drag men down and distort them from being the men God created them to be. Trace any current of the malestrom to its roots, and you’ll end up looking at patriarchy.

If I were still writing Malestrom, I would be sorely tempted to feature Donald Trump as an iconic example of a malestrom casualty.

Although the destructive effects of patriarchy on women are well-known, patriarchy is also destructive to men. The competition it produces goes beyond toxic verbal political battles. It produces the violence that began when Cain killed Abel and that we witness daily in wars, on city streets, and behind closed doors. Patriarchal notions mean manhood must be earned, that it is out of reach for some men, and that it is perpetually in jeopardy for all the rest.

Barbara Walters powerfully demonstrated that fact when she interviewed Donald Trump as one of her 10 Most fascinating People of 2015. The man who prides himself on being “successful,” “rich,” and “a winner” wasn’t prepared for what she would ask. She caught him off-guard and exposed his vulnerability to the malestrom when in her characteristic blunt manner she asked, “If you lose the Republican nomination, are you a loser?”

Stunned and momentarily deflated, Trump paused before reluctantly replying, “In a certain way, yeah. Hate to say it. If I lost the nomination, yeah, I guess I’d call myself a loser. I never said that about myself before.”

“Loser” is one of Donald Trump’s weapons of choice in his demeaning verbal arsenal. Every tactic he deploys against opposing candidates and critics is an effort to put them in the “loser” category and to preserve his status as a winner. His goal is to diminish their manhood to reinforce his own. It is a fight to maintain supremacy—to secure the top spot on the human power pyramid. It reveals Trump’s definition of what it means to be “a man.” Yet, as Walter’s revealed, his brand of manhood is fragile—hanging by the slender thread of his ability to prevail over others.

Walter’s interview forced Trump to admit the possibility that the label he so freely and cruelly attaches to others could one day be plastered to him. It was a reminder that even the top of the hierarchal human power pyramid—be it global, political, corporate, religious, domestic, or otherwise—is not a secure place.

That same vulnerability targets other men, including evangelical white males who have thrown in their lot with Trump. The realities of cultural and economic changes—the rise of women and the shift from an industrial to a service and information economy—have taken a significant toll on men who previously benefitted from a culture that catered to the skills and strengths of white males. They look to Trump because he embodies the “manliness” they’ve lost or are fearful of losing.

Kinder-gentler versions of manhood and calls for men to “man-up!” and take charge that thunder from evangelical pulpits and appear in books addressing men merely situate evangelicals on the cultural manhood continuum. Such definitions are woefully inadequate and run the risk that men, like Trump, will take things too far. Worse still, they fail to offer men and boys the indestructible identity, dignity, meaning, and purpose that their Creator intended when he bestowed the imago dei on all his sons and daughters.

Evangelicals owe Donald Trump a word of thanks. His macho candidacy actually provides the perfect opportunity to ask ourselves some serious questions. Does Donald Trump represent evangelicalism? Does his brand of manhood look anything like Jesus? Trump is raising pressings issues American evangelicals can’t ignore.

Thanks Donald for bringing patriarchy back into the conversation!

1 Response to Why Donald Trump is Good for Evangelicals