Posted on May 27, 2016 by carolyncustisjames 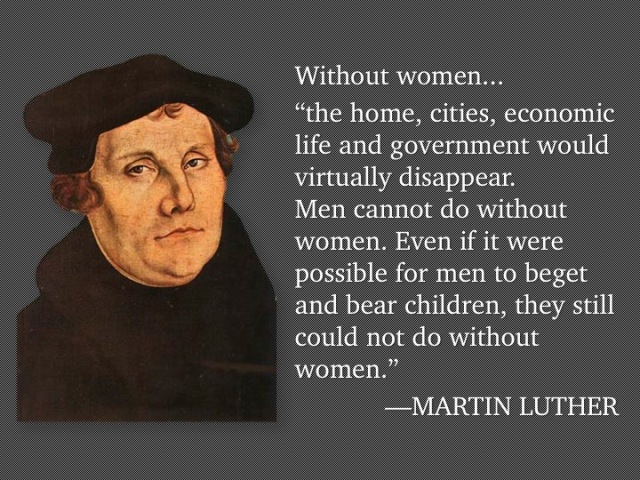 Every once in a while, we have a major breakthrough for women.[1]

Thanks to Katharina von Bora (1499-1552), the great reformer Martin Luther came to his senses on the subject of women. Katie, a rebellious nun turned Protestant, became the wife of the matrimonially reluctant Luther who soon discovered how indispensable she was to him.

He was surprised by how capable, wise, and strong she proved to be—virtues he came to depend on.

My historian husband has a way of surfacing the good, bad, and ugly about those “heroes” of history that we tend to place on pedestals, but who repeatedly demonstrate that they had feet of clay just like the rest of us.

Luther was no exception. Prior to his marriage, he was known to say some terrible things about women.

Let me put it this way. Some of Luther’s pre-nuptial comments would fit well into the litany of misogynist rhetoric we’ve heard coming from Donald Trump.

No doubt inspired by good German beer, Luther once pontificated with certainty:

“Men have broad and large chests, and small narrow hips, and more understanding than women, who have but small and narrow breasts, and broad hips, to the end they should remain at home, sit still, keep house, and bear and bring up children.”          —The Table Talk Or Familiar Discourse of Martin Luther[2]

The revelation to Luther that men “cannot do without women”—and not just in marriage—was the truth all along. Didn’t God say, “It is not good for the man to be alone. I will make a helper (ezer) suitable (kenegdo) for him” (Genesis 2:18)?

In case you don’t already know, ezer is a military Hebrew word. It’s used most often in the Bible for God as Israel’s helper in the Old Testament (16 of 21 times) and twice for the woman at creation. It’s not a description any of us can shed. It describes every girl child born in the world and stays with her for her entire life.

“connotes active intervention on behalf of someone, especially in military contexts, as often in Psalms” (emphasis added). —quoted in Malestrom

In his commentary on Genesis, Victor Hamilton writes,

“[Kenegdo] suggests that what God creates for Adam will correspond to him. Thus the new creation will be neither a superior nor an inferior, but an equal. The creation of this helper will form one-half of a polarity and will be to man as the South Pole is to the North Pole” (emphasis added). —quoted in Half the Church

It took firsthand experience for Luther to see the light. In God’s providence, Luther was joined in holy wedlock to a strong ezer-warrior who proved without a doubt she was his match. What is remarkable about Luther is that he didn’t see his wife as an exception to the rule, but drew conclusions about all women from what he learned from Katie.

And now we have in print what soldiering through life with her led Luther to say on the subject of women.