Posted on July 26, 2016 by carolyncustisjames 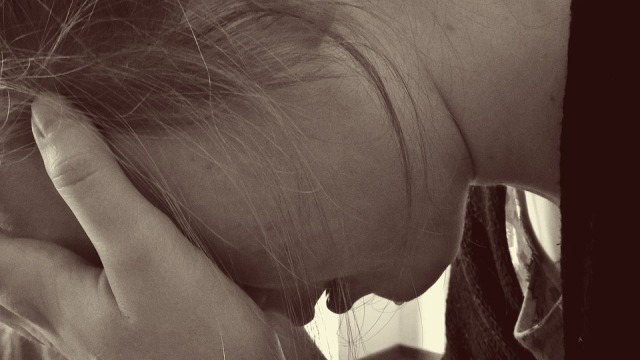 It isn’t often that I feel compelled to stick a warning label on a book. Having read Dr. Ruth A. Tucker’s memoir, Black and White Bible, Black and Blue Wife: My Story of Finding Hope after Domestic Abuse, I’m convinced this book needs one–not because the book is a disturbing read (although it is), but because reader reactions can cause us to miss the crucial main point of the book. 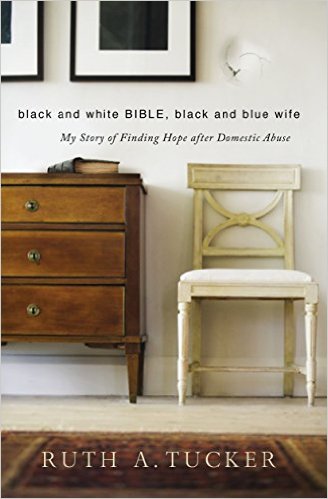 It takes courage to read Tucker’s gut-wrenching account of the horrors of domestic abuse she suffered at the hands of her pastor-husband. But courage alone won’t be enough.

Reading this book also requires a willingness to reconsider one’s view of marriage. This is no simple task because her story raises questions regarding deeply held beliefs about marriage roles, male headship, and female submission that many evangelical Christians consider sacred and nonnegotiable. Yet the “silent epidemic” of domestic abuse that concerns Tucker is so dangerous and life-threatening within Christian circles, and so easily concealed, we cannot afford to brush her off and refuse to listen.

Tucker, a highly regarded seminary professor and author, situates her memoir at the intersection between her all-too-real nightmare of domestic abuse and her own preconceptions about Christian marriage. Her training and experience as a seminary professor equip her to tackle the theological issues involved. But she brings a needed perspective to what might otherwise be a theoretical discussion of the theology of marriage. Tucker writes from inside the subject as a survivor of 19 years of spiritual, emotional, sexual, and physical abuse.

In her memoir, she is asking readers to enter into the horrors of domestic abuse with her and, to ask how Christian theology of marriage and gender contributed to her abuse. What this book requires of the reader is complicated by the fact that Tucker’s story of domestic violence is also her journey from traditional complementarian thinking to egalitarianism.

Already complementarian reviewers have reacted defensively, insisting that complementarianism has nothing to do with the abuses Tucker suffered and by refusing to recommend her book to readers (e.g., here and here). Thankfully, one of their own, Aimee Byrd, has taken them to task for this and urges her complementarian colleagues to read and fearlessly engage the questions Tucker raises. Byrd writes,

Here’s the problem: the “that’s not complementarianism” critique doesn’t have a leg to stand on when some of its most well-known proponents are quoted in the book teaching devastating applications of complementarianism. And while their teaching doesn’t advocate abuse ostensibly, it doesn’t protect women who are abused—at all. It exposes them to more abuse. And so it is fuel for an abuser. These are devastating quotes that need to be addressed. We must ask—what is being taught in the name of complementarianism? Are all of its teachings biblical? That is a question I have been asking the leaders in the movement for a while now.

Egalitarians, on the other hand, can experience a false sense of complacency, assuming egalitarianism is a cure-all—that abuse is no longer a threat where mutuality in marriage is embraced. Let’s be honest. Domestic abuse happens in egalitarian marriages too. The truth of the matter is that all of us have more work to do.

St. Paul’s teaching brings Jesus’ gospel into marriage and constitutes an overthrow of patriarchy. In this regard, I don’t think Tucker takes the discussion of marriage quite far enough. In the end, she maintains some vestige of patriarchal thinking with power shared between husband and wife. At one point she refers to “the beautiful picture of patriarchy” (63).

Here’s the problem: So long as patriarchy is retained, Christian marriage remains stationed on a relational continuum that when taken to extremes opens the door to (if not enables) abuse.

Against that patriarchal backdrop, Paul’s teaching regarding marriage is a radical departure from (not a softening of) 1st Century marriage mores. In that culture, a husband had life and death powers over his wife/wives. Dr. Roy Ciampa’s eye-opening article, “Identity Mapping,” is an excellent resource that belongs in this discussion.

Now Paul calls a believing husband to an entirely new lifestyle—to love his wife as he loves his own body and to lay down his life (a.k.a, live sacrificially) for her.

Try selling that idea in entrenched patriarchal cultures today—Afghanistan, Pakistan, Saudi Arabia for example. They’ll tell you this is radical.

Paul’s first century teachings don’t get 21st Century couples off the hook. Instead, his teachings raise the bar for how we take the gospel into our marriages today. His first century example escorts believers into a whole new revolutionary gospel way of relating to one another in marriage—to “put the interests of others ahead of yourself.”

This book could save the lives of women trapped by domestic abuse. By courageously reliving in print years of degrading violence at the hands of her “Christian leader” ex-husband, Professor Ruth A. Tucker exposes a problem of epic proportions that tragically exists unchecked behind closed doors within evangelicalism. Worse yet, she demonstrates how such violence is actually fueled by so-called Christian theology that empowers men with authority and privilege over women and children under the guise of “husbandly headship,” “servant-Leadership,” and calls for “wifely submission.” At great personal cost, Tucker drives a stake in the ground insisting that abusive behavior is both unacceptable and indeed criminal. Tucker’s book is nothing less than a damning indictment of the church’s tendency to justify or turn a blind eye to abuses happening within our own ranks. It is a prophetic call to re-think our theology of male and female. The church belongs on the forefront in the battle to root out and end abuse, to provide safe haven for the abused, and to see that abusers are brought to justice.

For anyone currently in an abusive situation
or sensing red flags: