Posted on December 16, 2007 by carolyncustisjames 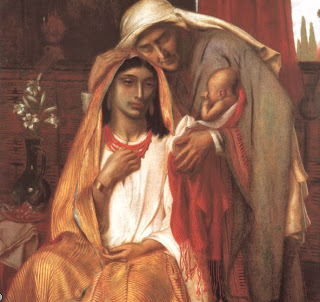 A friend of mine knows exactly how to create the perfect Christmas for her family. Visiting her home in December is like stepping into a Hallmark card or one of Budweiser’s “I’ll be home for Christmas” commercials—the ones with the Clydesdales pulling the sleigh through the snow that used to make me cry the first time I celebrated Christmas away from home.

Those Martha Stewart touches we all admire, that are embedded in our best Christmas memories (or fantasies), are a long way away from the raw courage and gritty determination that characterized women’s early contributions to Christmas. In the midst of all the hustle and bustle of Christmas, it’s easy to forget the heroic young ezers who risked everything to make that first Christmas possible.

Mary of Nazareth comes immediately to mind—the young teenager who sacrificed her girlhood dreams to join a cause that cast a dark shadow over her reputation and ultimately broke her heart. We’ve lost sight of the fact that there were two courageous young mothers and two miracles babies born in Bethlehem. Without both babies, there would be no Christmas.

Ruth the Moabitess doesn’t show up on Christmas cards, but she belongs there just the same.

Although separated by multiple generations, Ruth’s and Mary’s stories run on parallel tracks. Both were unmarried when they sensed God’s call on their lives. Both traveled great distances under stressful conditions to reach Bethlehem. Both made radical choices and costly sacrifices. Both had miracle pregnancies and gave birth to significant sons in Bethlehem. Both women heard and responded to a voice that gave them every reason to fear. But faith not fear drove their actions which ultimately blessed the world.

There are important differences too. Mary was betrothed—to Joseph, a man of extraordinary character. Her dreams were intact and her future secure (at least before the angel appeared). But any dreams Ruth may have had as a young girl had already gone up in smoke by the time she was in her mid twenties. She was certifiably barren—a disastrous label and an unspeakable sorrow in a culture where women were valued by their ability to bear sons—and then she was widowed.

Who would imagine God singling out a woman like Ruth to play a crucial role in His redemptive purposes for the world? But that’s exactly what He did.

The voice Ruth heard was not the angel’s proclaiming “Emmanuel”—God with us, but her bereft mother-in-law Naomi lamenting Yahweh’s departure. “The LORD’s hand has gone out against me!” Yet just as clearly as Mary heard the angel’s voice, Ruth heard God’s call at that dark moment.

What fascinates me about Ruth’s story is the fact that she moved forward without the benefit of the heavenly perspective that Mary enjoyed. Ruth saw her life from ground level the same way we see ours. From that earth-bound vantage point, her life didn’t look anything like a Hallmark card. Once in Bethlehem, she joined the ranks of gleaners—reduced to scavenge for a living.

But just like Mary, Ruth said “Yes” to Yahweh. She embraced the battles God placed in her path and determined to do whatever it took to put food on the table and to rescue Naomi’s family from the awful fate of extinction.

Of course, Ruth didn’t know she was getting ready for Christmas. She had no clue that God’s purposes for the world were hanging on the courageous choices she was making or that the family line she was fighting to save would one day produce the promised Messiah. From her ground-level point of view, Ruth was only putting one foot in front of the other to take care of Naomi.

And Mary would certainly need someone to explain to her that all the jingle bells, last minute shopping, and hoopla we go through each December are connected to the miserable ordeal she endured when she gave birth to Jesus in a make-shift maternity ward with Joseph as her midwife.

In a strange way, as Christmas approaches, the way these two women prepared for Christmas is a gift to me. Neither of them ever saw a heart-warming beer commercial, a Hallmark card or a Christmas tree. Christmas for them meant saying “yes” to God. Meant costly choices. Meant moving out of their comfort zone to fight a battle and take up a cause that humanly speaking was impossible.

Most years, I believe I can manufacture the perfect Christmas for my family. This year, I know up front I won’t be able to pull it off. There’s too much loss and heartache in my family at the moment to convince anyone that life can be perfect—even on Christmas Day.

Perhaps instead of striving to produce the kind of Christmas that is unrecognizable to its originators, I’d be better served by bringing their Christmas into mine—a Christmas that admits I need a Savior to rescue me. That centers on saying “yes” to God’s calling on my life and to the battles He is calling me to fight. That looks at life from ground level, sees the messiness, the confusion, the impossibilities and yet believes that what is happening here is part of the bigger story He is weaving.

Who knows? This may be the best Christmas yet.

6 Responses to Gift of the Ezers