The Dictionary According to Jesus

Posted on November 14, 2007 by carolyncustisjames 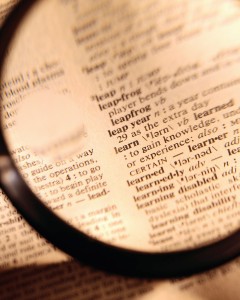 Theology runs in my family. I think it’s in our DNA. Recently my two seminarian nephews attended an academic conference on the Dead Sea Scrolls. Simultaneously, over a thousand miles away on a California freeway, the same subject captured the imagination of my niece’s four-year-old son. (See, I told you it’s in our DNA.)
Riding along in the car with his mother, he heard something on the radio about Dead Sea Scrolls and began jabbering excitedly about what he referred to as “the Dead Sea squirrels.” According to his version of the story, people who believed in God went into some caves and found a bunch of squirrels. They wrote Bible verses on pieces of paper and tied them to the tails of the squirrels. To his four-year-old mind, Dead Sea squirrels make great evangelists.
I didn’t encounter “scrolls” or “squirrels” as I wrote The Gospel of Ruth. But I faced the same potential for confusion in two important words—one I was eager to study and a second I tended to avoid. I never imagined how these words would intertwine or how their combination would shake up my whole vocabulary.

The Hebrew word “hesed” is a beautiful word that appears three times in the Book of Ruth. In a very real sense, this word drives the action and holds the key to unlock the gospel-rich message of the story. All three leading characters—Ruth, Naomi and Boaz—are hesed-givers.

“Submission” doesn’t show up at all in the Hebrew text of Ruth. But traditional interpretations portray Ruth as deferential and passive and have attached this label so stubbornly to her that she has become something of an icon of the submissive woman.

Both words gave me a lot of trouble. Then I realized that conventional definitions of these terms drain them of meaning and are as wide of the mark as “squirrels” are from “scrolls.”

No English word exists that adequately expresses a hesed kind of love. Bible translators offer us a smorgasbord of choices: loving-kindness, loyal love, kindness, mercy, or just plain love. But none of these words—either alone or combined—come close to capturing the rich potency of hesed.

Submission carries all sorts of negative connotations for many women. It often implies subservience and has become a handy tool for breaking unpleasant marital deadlocks. In a world where violence and oppression against women are rampant, it’s a very tricky business to counsel women to yield to the will of men. Everyone is concerned about the abuses, and scholars go to great lengths to apply this clear biblical command in healthy and positive ways.

An added difficulty for me was the fact that, although Ruth obviously respects both Naomi and Boaz, she stubbornly resists Naomi’s directives to return to Moab, and Ruth’s shocking proposals to Boaz break all the rules of properly submissive feminine conduct. Instead of a demure, deferential woman, Ruth is strong, gutsy, and courageous, and consistently takes the initiative with Boaz. Her behavior doesn’t line up with what I’ve always been taught about submission.

What helped me to deepen my understanding of these important words—hesed and submission—was to throw out Webster’s Dictionary and consult instead the dictionary according to Jesus. Under Jesus’ tutelage common everyday words like “neighbor,” “mother and brothers,” “lust,” “meekness,” and “prayer” take on richer meaning and mushroom in scope. Our human dictionary tends to narrow, downsize, and even trivialize the meaning of biblical words. Our understanding seems embarrassingly puny next to Jesus’ robust definitions. Jesus stretches us and takes us to a radical counter-cultural way of relating to others.

Hesed and submission are not soft words. They are attributes of Jesus that every one of his followers—female or male—is called to emulate. Neither hesed nor submission are about “giving in” to the whims and wishes of others. Both are all about “giving out” from the completeness we have in Jesus and our passion for His kingdom. Ruth, Naomi and Boaz embody both of these words as they freely make thoughtful, determined, costly sacrifices for each other. Together they cause the light of the gospel to shine brightly from the pages of the Old Testament.

Jesus calls us to live dramatically different lives than the rest of the world. Not “kinder and gentler.” Radically different. We’ll be talking “squirrels” instead of “scrolls” unless we let Him define His own terms.

15 Responses to The Dictionary According to Jesus