Posted on November 15, 2008 by carolyncustisjames 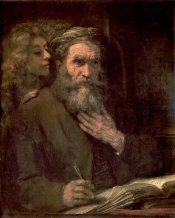 In the aftermath of the 2008 U.S. presidential election, the word “change” is still on everyone’s lips. Change was the central theme of both campaigns and the exclamation point in President-Elect Obama’s victory speech: Change has come to America!

What strikes me as strange about our American enthusiasm for change (and count me in as someone who wants to see change!) is that at the moment we are knee deep in changes we didn’t vote in, yet are powerless to stop. The current global financial crisis has us watching daily stock exchange reports like soap opera fanatics. Everyone is on edge. The unpredictable shifts and surges of global politics and power are introducing changes that are frightening and changes that create exciting new opportunities.

Lately, I’ve been thinking a lot about change, not so much because of the election, but because of a large box UPS deposited on my porch last Spring. Inside was a 1500 page manuscript (over 10 inches thick!)—a commentary on the Gospel of Matthew that I had agreed to review. The timing was terrible. I didn’t know whether to laugh or cry. What happened afterwards has been eye-opening for me.

Before that box arrived, I never paid much attention to Matthew. He’s one of the forgotten apostles who gets eclipsed by the more prominent figures—Peter, James and John. Yet, as I started thinking more about Matthew’s story and how it smolders beneath the surface of his writing, his Gospel started to come alive for me, so much so that I haven’t been able to stop thinking about it.

Take for example what Matthew is teaching me about change.

Anyone who knows Matthew’s story knows he desperately needed change. Caught up in one of the most notorious, unethical, and lucrative professions in Israel, Matthew was a charter member of the club of individuals about whom it is fair to say, “Greed got the best of them.” I have a hunch that if Matthew were alive today (at least the pre-disciple version of him) he’d be right in the middle of the current financial crisis as part of the problem.

His job was to collect taxes for the occupying Roman government from his fellow Jewish citizens. That was bad enough. But as the deal went, he could pocket whatever extra he could squeeze out of hapless tax payers, which is exactly what he did.

Like today’s golden-parachute CEO’s, Matthew’s financial prosperity came at a steep personal price. First century Israelite tax collectors were among the most despised members of Jewish society. Instead of gaining stature from his impressive portfolio, Matthew was shunned and mistreated in a hundred different ways. Pharisees spoke of tax collectors with utter disgust. No doubt Jesus’ other disciples found it hard to stomach the admission of a tax collector to their inner circle.

Matthew is one of several biblical characters (like Rahab the Harlot and Simon the leper) who never seemed able to shake his past. Although other biblical writers graciously drop the derogatory descriptor, in his own Gospel he stubbornly lists himself among the other disciples as “Matthew the tax collector.” Evidently it was important to Matthew that we remember where he was when Jesus found and rescued him.

But Jesus isn’t simply in the business of saving souls. He’s in the business of bringing change. There’s a kingdom to restore, and Jesus’ agenda for change begins with people. Matthew is “Exhibit A.” Jesus called Matthew to “Follow me!” (Matthew 9:9). A call for change is embedded in Jesus words. Change was also implicit when Jesus called others to, “Repent, for the Kingdom of heaven is near” (Matthew 4:17).

I never put those two imperatives together until recently. When I did, I began to wonder if I had stumbled upon clues to Jesus’ strategy for change—golden safeguards, if you will, designed to keep believers moving steadily along the path of Kingdom change that Jesus means for us to travel.

The Greek word for “repent” means “to change your mind.” It’s not enough to quit a corrupt tax collection business and find a more suitable line of work, although that was surely a start for Matthew. Nor is repentance confined to occasional moments of remorse over lapses along the way, although that is important too. These narrow definitions of repentance can leave us thinking we’re doing just fine—that repentance is for others. Which is exactly what the Pharisees thought. The true definition runs much deeper, exposing the most godly, mature believer to profound reasons to repent.

Repentance addresses the fact that at a systemic level we are all out of alignment with our Creator and with our noble calling to be His image bearers. God Himself pointed out the utter seriousness of our problem when He said,

According to God, that’s a pretty wide gap, and we all suffer from it. Jesus’ call to repent summons us to work at change, at shedding layer by layer our kingdom-of-this-world thoughts and ways, at making intentional strides towards becoming who God created us to be. Admitting and reminding ourselves that we are out of alignment with God is the place for us to start.

Make a U-turn. “Repent, for the Kingdom of heaven is near!”

“Follow Me!” completes the thought by identifying where we need to go and who is here to help us. Matthew’s Gospel is unambiguous when it comes to defining the changes Jesus has in mind. Matthew pursues change for himself by spending time with Jesus. Studying His ways. Weighing His words. Comparing himself to Jesus. Repenting the disparity and imitating what he observes in Jesus. And all the while, Matthew himself is gradually changing—embracing a Kingdom perspective on money, a Kingdom attitude towards society’s outcasts, and a Kingdom selflessness that contrasts sharply with the grasping life he left behind.

Read Matthew’s Gospel and see what a recovering tax collector wants us to know about change!