Posted on July 2, 2011 by carolyncustisjames

Can’t say they didn’t warn us. Still, we were not prepared for what we experienced when we visited two of Casa Roca‘s 11 Children’s Homes in Colombia. Esther Lucia de Silva-Silva, wife of Pastor Dario Silva-Silva, is the visionary and driving force behind these homes.

Little did we know we were about to enter a sacred place, where the gospel is being lavishly lived and young lives are being nourished with all that love can give and rising up to give back in many ways.

Esther told us “Our children are extraordinary,” that “We are family, and this is home—not an orphanage.”

The children come from rough backgrounds. Some were born to women who have been trafficked. Here they find the love of family and advocates who prize them and believe they are children of promise. Home parents are committed for the duration, and “The children can stay as long as they want.”

Esther was emphatic. “We don’t give second best to our children. We give them the best!” New clothes. New toys, and whatever they need to put their young lives on solid footing. Beyond the four walls of an orthodontist’s office, I’ve never seen so many teeth in braces (“brackets”) all in one place. The children receive the best education and, come summer, a fun vacation at the beach!

First stop was the girls home.The facilities were charming! The children were loving and friendly. You couldn’t walk far without a small hand slipping into yours, defying any language barrier. 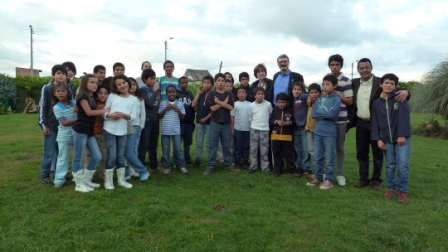 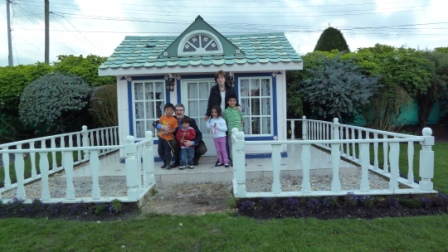 The eye-opener for me was realizing that, just like any healthy family, the Casa Roca family is launching theit children. Loved and nurtured, they are flourishing spiritually, intellectually, professionally, and personally. They are becoming serious Christians and Colombia’s future leaders. Which exposes the fact that to think of investing in the lives of forgotten, at risk children as rescue or charity completely misses the point. Completely! The potential that lies buried in these precious young lives—that can so easily be squandered by neglect and lack of opportunity—can bless the world. Instead of benefactors, those with resources are beneficiaries of the gifts and contributions these young people are capable of offering. We heard the stories of three great examples. 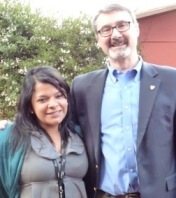 Eli Johana Henao (also with Frank on the right) joined the family as a young girl after early years of terrible suffering. The stubborn love of family, Esther Lucia de Silva-Silva’s relentless pursuit, and the power of the gospel softened her heart and changed her life. She is a glorious miracle. Having graduated from university, she has a career in media as a photographer and a producer of the Dario Silva-Silva’s television ministry. Eli is soon to be married to a young pastor.

Yesid David Bernal is a rising star in the world of Colombia journalism. A university graduate with a degree in journalism, David writes for La República, Colombia’s version of the Wall Street Journal. While we were there, Pastor Dario handed us a recent issue containing an article David wrote on a Microsoft Research Faculty Summit.

Kelly Santamaria, along with Eli, attended the women’s conference where I spoke. This high schooler was drawn to teaching on the ezer, embraced it for herself, and spoke with incredible warmth of how Esther is an ezer for her and the other children in the homes.

The original plan was for us to visit the girls’ home only and for the boys to come over to meet us and have cake and hot chocolate mixed with melted cheese, which they did. But the boys wanted us to see their house too. So before heading back to the hotel, we made a second stop at the boys’ home where they gave us a tour of their home. I’ll let Frank tell you about our visit there.