Posted on November 16, 2017 by carolyncustisjames

It was one of those moments I will never forget. I was at a Synergy conference when I asked a roomful of Synergy women how many of them were involved in ministry because of the advocacy of a man.

Nearly every woman in the room raised her hand.

I have no doubt that most every raised hand represented more than one man. That is certainly true for me. Of course, it is no secret that my husband has opened doors for me (and often shoved me through the opening).

It is also true that I am indebted for my writing career to Stan Gundry.

In 1998, Stan (Zondervan’s Editor-in-Chief) was on campus at Reformed Theological Seminary/Orlando where Frank was a professor. Stan was there in search of prospective authors among the faculty. When the two of them met, Frank (ever the CCJ promoter) mentioned that Stan might be interested in work I was doing. Frank came home with an invitation in hand for me to submit a book proposal to Stan.

When Life and Beliefs Collide: How Knowing God Makes a Difference was the ultimate outcome of that proposal, but it didn’t come without a fight. I wanted to write about the importance of theology for women. But this was not the kind of book publishers were typically releasing for women.

Stan, already a staunch advocate for women, was unflinching in his support from the beginning. He was also realistic about the challenges involved in getting a contract. For me, the process involved a rejection letter from a male editor, a follow-up conversation with Stan who nudged that editor to give my proposal another look, and getting through the final jury—an all male publishing board.

From the start, I had two strikes against me. First, that I didn’t have a large audience, and second, that the men on the publishing committee didn’t think women would buy a book about theology—what they called the “dreaded T-word.”

What tipped the scales for me was a pile of impassioned letters from women who wrote to tell Zondervan that they wanted serious theological books. Later, I learned that Stan finally told the Pub Board “Maybe we should trust the ladies on this one.”

I couldn’t have imagined a better advocate!

He didn’t stop there. He befriended, mentored, and coached me every step of the way. He is always checking to make sure his team is treating me well—which I’m happy to say they always are.

I know I’m not the only one who loves and thanks God for this wonderful man. His ears should have been burning recently when I was at Moody Bible Institute, where earlier in his career he was a theology professor. One of the current professors, Dr. Pamela MacRae, told me that he was her favorite theology professor.

Today, November 16, at the Evangelical Theological Society, Zondervan unveiled a new book—a Festschrift—in Stan’s honor:  Evangelical Scholarship, Retrospects and Prospects: Essays in Honor of Stanley N. Gundry. (If you don’t know what a Festschrift is, you have a new word to Google. Look it up! It’s a huge honor.) It was a total surprise to Stan—and no small feat on the part of Katya Covrett and company to pull off the covert publication of a Zondervan book under the ever watchful eye of the vigilant Editor-in-Chief who was totally surprised.

Stan, you are the man—a kind a gracious man!  Many thanks and congratulations! 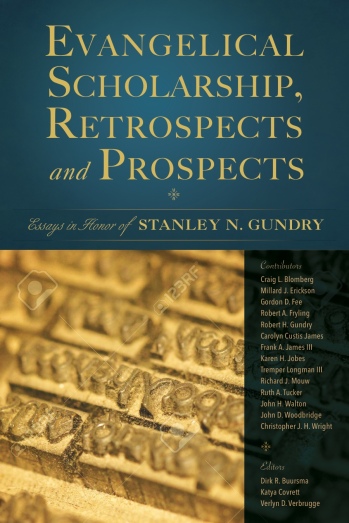 4 Responses to Stan the Man!