Posted on December 14, 2011 by carolyncustisjames 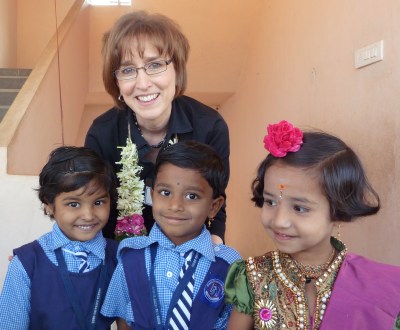 If there’s one lesson to be learned from all the people who suffer poverty, abuse, and injustice, it is this: the world is impoverished so long as they remain captive and enriched when they’re set free and empowered to cultivate and use their God-given gifts.

That’s the not-so-subtle message of the Chinese saying, “Women hold up half the sky.” So guess what is falling and who else pays a price when women are trafficked, raped, denied an education, and marginalized?

That’s a sobering question to ponder!

It’s a message I read in Scripture. Who would believe a powerless trafficked Egyptian girl named Hagar would become the prophetic voice to reveal the intimate side of the Creator God as the one “who sees me.”

Would anyone expect a trafficked Israelite slave being held unjustly in an Egyptian prison to catapult overnight to become Pharaoh’s second in command or of developing a strategy to preserve the entire nation during a prolonged famine?

Who would believe God would summon a young barren Jordanian widow and her bereft Jewish mother-in-law out of the margins to fight for the next generation and ultimately rescue the line of Christ?  Only think what the world would be missing, if any of them had been forgotten and left to languish in the margins!

That same message keeps sounding through the stories of the people I meet.

Several months ago, I encountered a bright young twenty-something woman from Ivory Coast. She was born to a vegetable vendor who had five sons and no use for a daughter. So her mother gave her to an American family. How differently her story is playing out.  Instead of remaining illiterate, being married off (or trafficked) at an early age, suffering an early pregnancy and possibly fistula, my young friend is a Wellesley graduate, now with a masters degree from Harvard. I shudder to think of the treasures the world has thrown away by failing to see and empower the undeveloped human potential that God has implanted in his image bearers.

This past week in India, I saw it again. Yes, I saw overwhelming poverty. I heard disturbing stories of injustice that have left me aching. I doubt I’ll ever shake the appalling images of the unbearable mistreatment of the Dalit people. One pays a terrible price for being born into the lowest caste.

But I also witnessed the flip side—where poverty and oppression are rendered powerless against the strength of the gospel to release the human treasure that God intends should flourish.

We visited the Good Shepherd School—one of Operation Mobilization’s network of schools in India that is currently educating 25,000 Dalit children. 600 children are enrolled at this particular school.

At these schools, no one is willing for little ezers to get left behind.  If a family sends their son to school, leaving his sisters behind, the school won’t take him until his sisters come too. 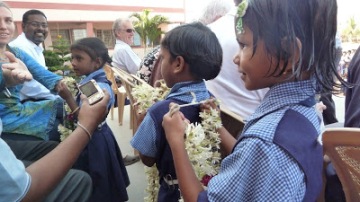 The students welcomed us with garlands, sang and danced, made speeches, celebrated birthdays, and shared their birthday candy with us. Their joy was infectious.

Students who will graduate this year and move on to college told us their goals—to be a teacher, an engineer, a scientist, a policemen. These aspirations wouldn’t have occurred to them apart from the education and affirmation they’re getting here. OM stays with them to ensure they reach their goals.

If a student is not able to go to college, they have other options. We visited silk screen printing and sewing classes to get a sample of the training OM offers. All those smart looking uniforms are handmade by seamstresses trained on site. Microfinance loans are helping these graduates and others in the community launch new businesses.

There’s more good news, for as these young people learn and flourish, escape poverty and become the promise of India’s future, they are also hearing the Gospel and God is changing hearts.

Before I left for India, I was told my heart would get broken again. It did.  You can’t listen to the stories of injustice I heard and not have it break your heart. But what surprised me most of all was the undercurrent of hope that permeated the Justice Forum to defy these grim realities. The trip to India was an unexpected reminder that God is on the move. His people are at work. Lives are changing. Buried treasure is being unearthed. Darkness is no match for the light.

2 Responses to Finding Treasure in India