Lean In: Working Together Toward Equality

Posted on July 15, 2013 by carolyncustisjames 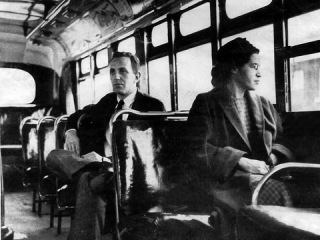 In 1955, Rosa Parks’ refusal to give up her seat on a public city bus marked a significant challenge to the status quo and a step forward for racial equality. Overnight she became an international icon of resistance to racial segregation and simultaneously gave women another picture of how their courageous actions could help to change thing for others.

In the final chapter of Lean In, Sheryl Sandberg returns to the topic of gender equality and urges women to work together to move things forward.

As we are painfully aware, gender equality can be a touchy subject in Christian circles. In all but extreme cases, gender equality is widely embraced among evangelicals, not as a modern concept, but as a thoroughly biblical and foundational creation concept established when God designated both male and female as his image bearers. Exactly what we mean by gender equality and what implications we draw … well, that’s an entirely different story and, as we well know, a subject of considerable debate.

Looks like Lean In Chapter 11: Working Together Toward Equality may be wrapping up our discussion on an interesting note that hopefully will challenge thinking for all of us.

While acknowledging institutional barriers that hold women back, Sandberg believes the best way forward is for more women to reach high level leadership positions so they can influence those decisions. In her thinking, female ambition is not an end in itself but rather the first link in a chain of events to change the system. She calls women in leadership to leave the door open wide for other women to follow and to influence changes that make it easier for women to advance (whether by choice or out of necessity) without penalizing their families.

She zeroes in on how women create barriers for each other—by viewing each other as competition rather than allies, by embracing gender-bias against other women (in order to survive and/or fit into a male-dominated work environment), and when women outside of the workforce (often wives of the successful woman’s male colleagues) become the successful woman’s fiercest critics.

Citing the rivalry between Betty Friedan and Gloria Steinem and between combatants in the Mommy Wars as prime examples, Sandberg reasons,

“Every social movement struggles with dissension within its ranks, in part because advocates are passionate and unlikely to agree on every position and solution. …We should strive to resolve our differences quickly, and when we disagree, stay focused on our shared goals. This is not a plea for less debate, but for more constructive debate.” (p.162)

Sandberg bolsters her call for peace among women by quoting no less than former Secretary of State Madeleine Albright, who once famously remarked, “There’s a special place in hell for women who don’t help other.” (p.164). (I wouldn’t put it quite like that, but let’s just say that Madeleine and I are on the same wave-length.)

On the positive side, Sandberg describes women who “pay it forward” by advocating for each other. One group met regularly to listen to each other’s achievements and frustrations and used that information as fodder to “tout one another’s achievements.” (p.164) Sandberg credits their mutual advocacy in part for how those women’s careers flourished and they rose in the ranks to high level positions.

“True equality” is her ultimate goal.

“… to encourage women to dream big, forge a path through the obstacles, and achieve their full potential. … that each woman will set her own goals and reach for them with gusto. … that each man will do his part to support women in the workplace and in the home, also with gusto. As we start using the talents of the entire population, our institutions will be more productive, our homes will be happier, and the children growing up in those homes will no longer be held back by narrow stereotypes.” (p.171)

She envisions true equality as a “better world, one where half our institutions are run by women and half our homes are run by men.” (p.172)

I couldn’t agree more with Sandberg on the need for women to support one another. That was the driving force behind the founding of the Synergy Women’s Network. However, Sandberg’s concept of equality is grounded in statistics that are contextually based and sadly out of reach for the vast majority of women around the globe. And frankly, a fifty-fifty statistical balance cannot itself deliver the kind of valuing, collaboration, and justice which we desire. Earlier chapters in her book are stark reminders that getting to the table, even leaning in and speaking up, can be met with additional layers of devaluation, marginalization, and even abuse.

Rosa Parks secured a better seat on the bus, but even after Civil Rights laws were passed and segregation ended, did she ever lived to experience true equality?

The Bible presents an entirely different and profoundly radical concept of equality that is hardwired into every human soul and extends to every culture and strata of human society. We are already “equal” because God created us that way. I would argue that the real question we face is not how to achieve true equality, but rather how to live within the true equality God intended for us from the beginning.

God set equality among human beings in stone on page one of the Bible when he designated both male and female as his image bearers. It is an exalted calling shared by all and endowing every human with infinite value. That true equality was shattered in the fall and a pecking order installed by a fallen humanity. The Good News is that Jesus’ gospel restores that original vision, and Paul explains how Jesus’ gospel rearranges us.

The practice of ranking one another on the basis of normal human categories that are visible to all—gender, ethnicity, and social status—is emphatically rejected in the Kingdom of God. In his letter to the Galatians, Paul argues for a globalized gospel equality: that not just Jews, but all who believe are now “children of Abraham” (3:7); that distinctions between sons and daughters are erased, for “you are all sons of God through faith in Christ Jesus,” (3:26); and that “There is neither Jew nor Greek, slave nor free, male nor female, for you are all one in Christ Jesus” (3:28). As Christians, we are to see each other through different eyes and refuse to grant to any subset of those categories (e.g., male, Jewish, or free) priority over others.

In Galatians, Paul drives home the point that those who follow Jesus cease to operate within the world’s value system. Instead of mirroring the same struggles we witness in the secular working world, leaders in churches and ministry organizations who profess to follow Jesus should be setting a higher standard. In a world shaped by gender, ethnicity, and social, cultural, and economic backgrounds, Christians should be counter-cultural by how we value each other, expand the table, and prize what each unique individual contributes.

We begin to make progress toward a different vision of equality, not when another chair is pulled up to the table because a woman is clamoring to be there, but when the men at the table realize they need her there—where she is leaning in to seek and speak her truth and where others at the table are leaning in to benefit from what she brings that was missing before.

So What’s Your Take?

How do you define gender equality? How have Christian organizations allowed a gospel vision of equality to be co-opted by a secular vision of equality? Do you see progress being made to recapture God’s original vision for a male/female Blessed Alliance that is enriched by our diversity? Why or why not? Have you discussed any of the Lean In chapters with your male colleagues? If no, why not? If yes, what happened?

Lean in with your comments!

4 Responses to Lean In: Working Together Toward Equality